This is a contrarian strategy that makes you go against the trend, by combining price action with EMAs (Exponential Moving Averages).

Like all contrarian strategies, this too is risky and therefore must be played with strict stop losses.

However, if you play it right, it can generate very profitable swing trades.

Ad remember that by playing contrarian, you are going against the herd and that’s a good thing. Let’s start:

1. The EMA is closely aligned with the current price.

2. If the price is at an extreme divergence to the EMA, then wither the price will catch up with the EMA or the EMA will course correct itself and align closer to the price.

3. A candle with a long body implies solid buying (when green) or solid selling (when red).

3. WHAT TO WATCH OUT FOR

When price is at extreme divergence to 50 EMA on the Daily Charts.

Set up 2 screeners for your contrarian bets: 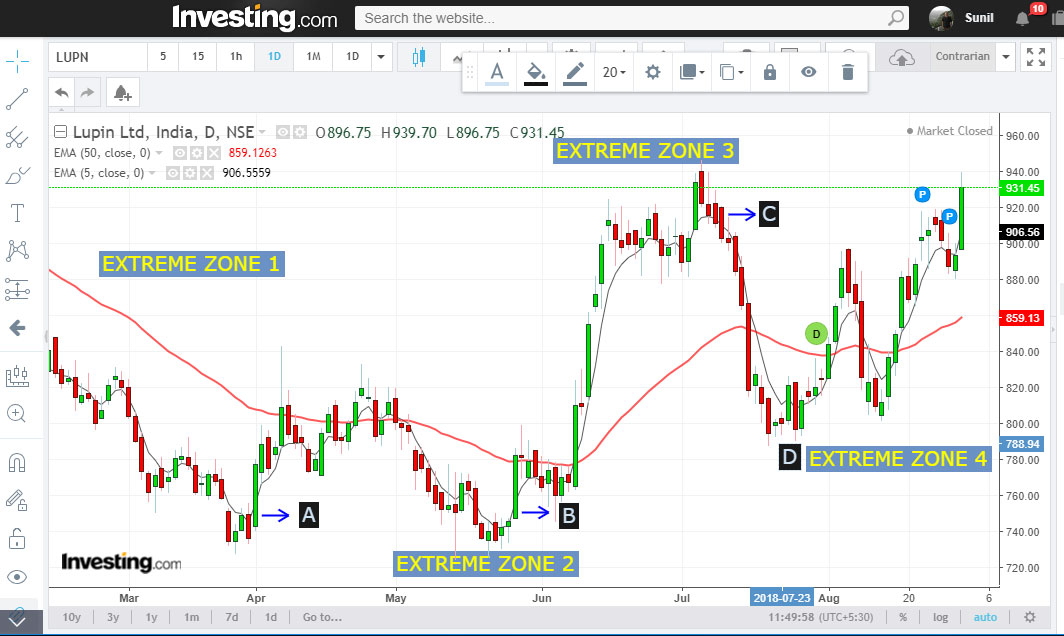 I have marked areas where there is an extreme difference between the price and the 50 EMA as extreme zones.

There are 4 such Extreme Zones marked.

The thin black line is the 5 EMA.

Here’s what you should do:

(a) Watch the candles in the Extreme Zone

(b) Look for long bodied candles that cross the 5 EMA either on the way up or way down in such zones.

(c) Trade Contra to the trend established by the 50 EMA.

Price had fallen way below the 50 EMA, which was trending down, when at point A, a large bodied green candle crossed above the 5 EMA.

That was an indication to contra traders.

Later it fell below the 5 EMA and retested its recent lows.

Price had fallen way below the 50 EMA, which was trending down, when at point B, a large bodied green candle crossed above the 5 EMA.

That was another indication to contra traders.

Though there were red candles after this contra signal was generated, none of the red candles broke down below the 5 EMA convincingly. This was an indication that one could hold on to positions, which were anyway in profits.

Price had risen way above the 50 EMA, which was trending up, when at point C, couple of large bodied red candles crossed below the 5 EMA.

That was a sell indication to contra traders.

As for now, Lupin is in Extreme Zone 4 and shorters should watch price action and 5 EMA from now on – with a strict SL.

That’s it. This is a simple but effective effective contrarian strategy. Try it out on paper trades, backtest it, whatever. Good luck.